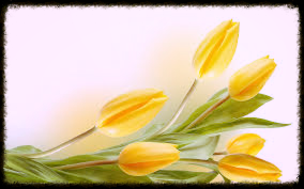 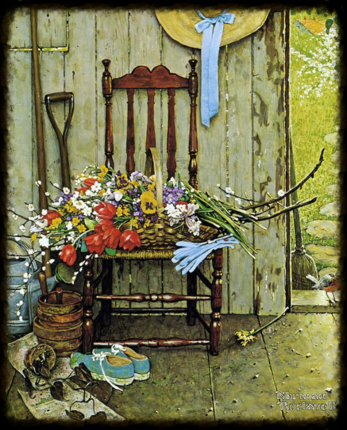 Sheila’s yard beckoned.  Michele and I were on the thrill to gather as many tulips as possible so we could thrust them into mother’s grateful arms for her birthday. My nimble, four-year-old hands holding implements, I ran as fast as I could, not understanding the reason we were hurrying so.  It was exhilarating, let me tell you, decapitating all sorts of vibrant tulips in the rosiness of their youth.  Some were beheaded properly and others just yanked out as I fell now and then.  I remember being a bit less street smart than Michele. In fact, to this day I have no street smarts whatsoever.  Michele, frequently a mastermind of this sort of thing, sparkled at me and urged me on,.  And anyway I loved flowers, I loved mother, I loved Sheila for that matter, and was filled with the imminent delight of presenting mother with a birthday bouquet.

At first, there was a smile of joy in our sun drenched kitchen.  But then a darkening cloudburst as mother realized these were not from the store.  Her metamorphosis was immediate.  There was only one neighbor who had carefully planted a yard full of vibrant indescribable splendor.  Sheila followed running across the front lawn with a look of stern grief for her missing poppets and her beloved yard that now looked a profusion of blight.

There was a sort of colorless aftermath as the stolen bouquet was whisked back to Sheila’s table, and those colorful petals faded into memories of a very sore bottom.  And mother halted all smiles for a long while which, I now suspect many years later, had prevailed on her face in private.

From my six year old vantage point, I was aware that mother did not wear her makeup.  Exotic creams, dried mascaras and past-season lipsticks were waiting for me, unused, in her bedroom dresser drawer. I thought it might just not have dire consequences if I were to regularly sneak in and play with them.

I’d smudge my face and feel the rush of being beautiful in a clown sort of way.  The cream was of a peculiar smell, and I found it invitingly stinky. I would rub it all over my face and neck especially.  Estrogen, it said on the intriguing container.  I had no idea what that was.  Oh dear.